Church Signs of the Times 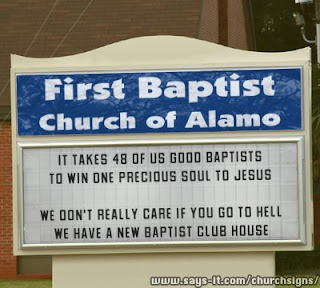 Southern Baptists have the fewest baptisms since the 1950s and are losing members. It's time to build a new building to celebrate our total refusal to win souls to Christ.

First Baptist averages ONE HUNDRED FEWER MEMBERS on Sunday morning than they averaged thirty years ago.

So we need a new church sign descriptive of what is happening. Since the newspaper is so excited to print publicity shots for the abandonment of the historic building on the most strategic corner in the county, let's see how the church sign will look for the first few Sundays of the grand abandonment of the city of Alamo. Let those lost people fend for themselves. We have a new building, new seats, new P.A. system, new band, new parking lots, new softball fields and plenty of space to grow to 200 on Sunday. 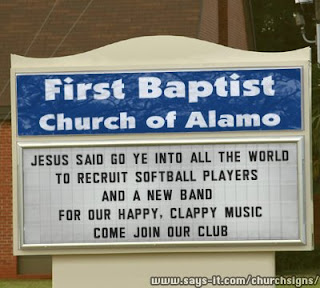 with less room and few complaints. But if you are not going to reach people for the Lord and win new souls to Christ, at least you can have new carpet and new seats and a new lighting system. Busy-work always gives the illusion that God if moving, when it's really nothing more than a few tractors moving dirt and a few guys playing softball for Jesus.

So it looks like the lost people in Alamo who do not attend church anywhere will never be asked to attend First Baptist Church. At this point, has anyone even tried to lead a single person to the Lord who lives within walking distance of the church building? I don't think so, but I could be wrong.

While there are far more Southern Baptist churches now than in the 1950s and 1960s, observers say baptisms have essentially plateaued since 1950. In 2010 there was one baptism for every 48 members of a Southern Baptist church. Sixty years ago the ratio was 1:19. In other words, it takes FORTY-EIGHT members of First Baptist Alamo to win ONE person to Christ. It takes 48 people to win one soul from hell?? Does NOBODY ever witness anymore? Do no church member or staff member EVER try to lead anyone to eternal life in Jesus? Who are you kidding? And you think you need a new building? In order for First Baptist to thrive as the living body of Christ, we need a lot less consumers and more co-laborers, people who are sharing the love of Christ with their neighbors, people who lead other people to Christ. Whatever you are doing now is killing the church. There are actually more new churches and fewer members overall.

So instead of winning lost people to Christ, good ole First Baptist will finally become the newest country-club on the highway. When you can't win souls to Christ, when you REFUSE to win souls to Christ, you just build a new building. Churches everywhere are doing it. Let the local folks just go to hell. We have a new club house and a huge debt to pay-off down at the bank. 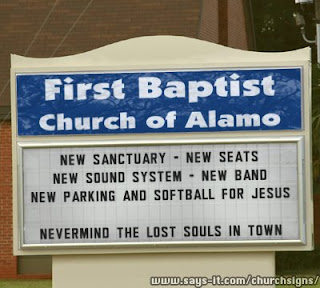 About Me and Why This Blog !


I am concerned when one side of an issue is presented as "God's will" and opposition is minimized or completely ignored. I am concerned with a "bully vote" involving millions of dollars, which is what happend at First Baptist Alamo. I am concerned that, by embracing error, the members of First Baptist Church Alamo are missing out on the REAL WILL OF GOD, which is to actually win souls (a wise thing), not build a country-club on the highway.


I am concerned that the leadership of the church will move out of town, leaving the congregation with millions of dollars in debt.


Examine everything. Consider all the options. Keep your hand on your money.